CHRISTMAS IN JULY SALE – SAVE ON LEATHER

On Special – All Leather Dickies® Style Work Jacket – ONLY $167 for a $328 jacket! Looks great on and off the bike… It is an old school design that is cool and never goes out of style.

It’s designed after the popular Dickies® work jacket with special features for added comfort & utility when riding. Features include: END_OF_DOCUMENT_TOKEN_TO_BE_REPLACED

Brass Balls is raffling off the Military Bobber with the proceeds going to the Intrepid Fallen Heros Fund. For just three Starbucks you could put a custom Digger motorcycle in your living room!

This fund is helping the returning veterans that have sustained head injuries. It is a way for you to support the troops and feel good at the same time. END_OF_DOCUMENT_TOKEN_TO_BE_REPLACED 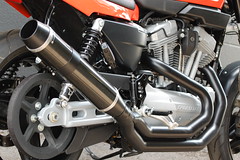 Twist the throttle and hug the hairpin… the XR1200 hits hard like a Harley-Davidson XR750 dirt track racer and D&D Performance Enterprises has just the added accessory… full throated exhaust system with the new Bob Cat pipe that delivers the Harley boom and performance at a reduced sound signature.

D&D has partnered with Zipper’s to create an END_OF_DOCUMENT_TOKEN_TO_BE_REPLACED

The best motorcycle footage ever recorded. Captures Smoke Out 10 and The Long Road from Cottonwood, AZ to Rockingham, NC. All the mayhem, crashes, burning bikes, bike show, interviews and strange super heros on mini-bikes.

END_OF_DOCUMENT_TOKEN_TO_BE_REPLACED 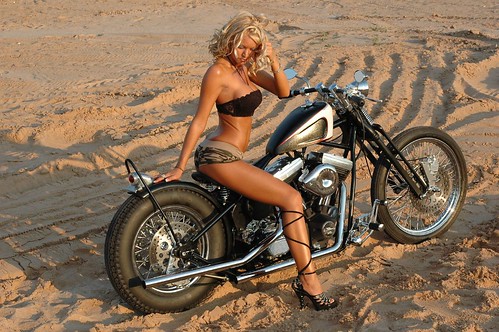 Top Clicks @ Brass Balls Choppers & Bobbers is none other than Megan, the Chopper Chick.

Monthly we track the activity of Brass Balls Choppers & Bobbers and it is of no surprise that Chopper Jockeys still find Megan to be popular. She has contrasting bronze skin and blonde hair that really sets off the motorcycle she is on.

Gratuitous Pictures of Megan
The following are a few additional pictures of Brass Balls most popular model.

END_OF_DOCUMENT_TOKEN_TO_BE_REPLACED 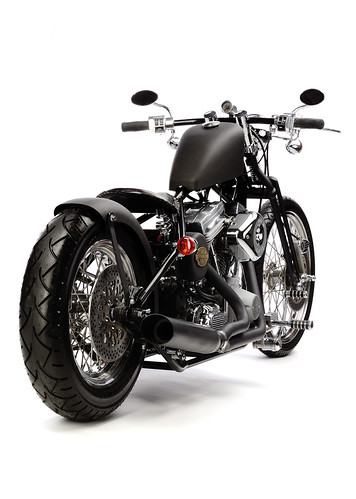 Q&A WITH THE POPE OF PIPE


G’day from Australia, just a short question… My 95in. Roadking is makes 95 HP & 100ft lbs torque with the Fat Cat 2 into 1, Andrews 67g cam, Screaming eagle heads , and a 45 Mikuni carb. If I put quiet baffle in for the Fat Cat, will I lose much HP and torque. Thanks,

The wrapped “quiet baffle” will perform the same. We spend time on the dyno extracting as much HP out of our systems as possible. You don’t have to retune the bike as long as your use the same type baffle.

Check out the latest exhaust solutions at D&D Performance Enterprises.

-The Pope of Pipe

END_OF_DOCUMENT_TOKEN_TO_BE_REPLACED

The Squirrel all started back in 1908, when Alfred Angas Scott built the first Scott motorcycle, a 333cc water-cooled two-stroke twin.

The allure of this bike starts with the Scott marque itself, which produced motorcycles so far ahead of their time that it’s hard not to label them technological oddities.

By the time the Super Squirrel debuted in 1924, when most motorcycles had heavy air-cooled four-stroke engines and solid forks, the Scott boasted a two-stroke motor, water cooling and telescopic forks.

END_OF_DOCUMENT_TOKEN_TO_BE_REPLACED

I am working on a deal to promote Brass Balls Bobbers’ quality and workmanship by extending Baker Drivetrain transmission warranty to 1 year or 3 million miles.

You see, during a discussion, Bert said that he would up Brass Balls Bobbers’ warranty of 1 year or 300,000 to 1 year or 3 million miles. So I emailed him at prickbastard @bakerdrivetrain.com (Got to love that email address!) to determine if he would really stand by that guarantee for a year. Then the unthinkable happened, the email kicked back.

I then got a hold of his Marketing Man, James Simonelli, and he said,

END_OF_DOCUMENT_TOKEN_TO_BE_REPLACED


What is value… How do you determine value?

Value can move like a thermometer on a hot summer day. I started thinking about it after I saw the numbers come in from the Steve McQueen auction.

I like wrist watches… The Rolex and Omega Seamaster, to me, are both fine instruments that have history and feel good on the wrist. They both have pedigrees as first class products and deliver as advertised. But I don’t have an emotional connection to them. But a Tag Heuer Monaco makes my heart skip a few beats.

This is the watch that McQueen chose to wear it in the 1971 car-racing classic film, Le Mans. It has subsequently become an icon. A new Monaco sets you back about $2,900.