The Big Wheel SS Trike made its North American debut on Saturday February, 20, 2010 at A Bikers Garage in Roanoke Texas. A number of enthusiast took test rides and this video records their impression of this innovative machine.

The D&D Bob Cat – 2-into-1 Pipe Pumps Up the HP & Torque By 10%. D&D has released the 2004 through 2010 Bob Cat Sportster Pipe that increases performance, torque and a soul-satisfying tone.

Get All the details at D&D Performance Enterprises.

Washing Off The Salt

The Speed Chair was designed by George Emmons Najar to get realistic shots and the feel of speed in a relative safe environment. The videographer has a clear 180 degree range to shoot. The chair was field tested at Bonneville with a Dodge HEMI at 120MPH.

The chair fits for and aft via a trailer hitch arrangement. It is built with tubular aluminum backbone and was welded together by the pros at D&D Performance Enterprises out of Ft. Worth, TX. The shooter is attached by a 5 point Simpson harness. Getting in and out of the chair, with gear at the ready, requires approximately 5 minutes.

We are currently in the planning stage for Bonneville and expect the Speed Chair to be part of the gear to be taken to the great white dyno on the ground. 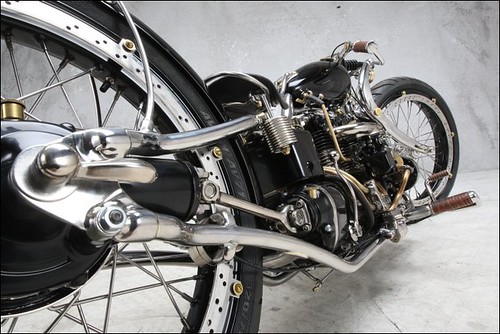 For the first time since its inception in 2004, an American custom motorcycle engineer has won the Official World Championship of Custom Bike Building.

The winner, Dave Cook of Cook Custom Choppers in Milwaukee, Wisconsin, was voted World Champion by his fellow competitors at an event that defied motorcycle industry downturn expectations. With an increased field totalling 83 custom motorcycles from around the world (compared to 67 in 2008), the 2009 event was hailed as showcasing the most advanced display of custom motorcycle design and engineering yet seen.

Who Will Win in 2010?
The 2010 World Championship of Custom Bike Building is right around the corner. Who will take it this year? We don’t know but we do know that you have to register to win… Get all the details here:

END_OF_DOCUMENT_TOKEN_TO_BE_REPLACED

The Official World Championship of Custom Bike Building is ramping up for another year of outstanding creativity and innovative design at the center of custom bike builders. The event schedule encompasses some 18 events in total, in 16 different countries: Germany, Austria, Switzerland, Italy, France, Spain, Portugal, Sweden, The Netherlands, Ireland, Japan, Australia, Russia, Canada, Mexico and the United States.
END_OF_DOCUMENT_TOKEN_TO_BE_REPLACED

MOUNTAIN VIEW, Calif. — In a meeting at Google in 2004, the discussion turned to an e-mail message the company had received from a fan in South Korea. Sergey Brin, a Google founder, ran the message through an automatic translation service that the company had licensed.https://bikerpros.com/thinking-of-selling-over-there/

The following is an ad that Biker Pros created for D&D Performance Enterprises to assist them in promoting their products in the Canadian marketplace.

Canadian Biker Magazine has offered a uniquely Canadian take on the sport and lifestyle of motorcycling. Beginning as a newsprint tabloid and evolving into the glossy magazine that it is today Canadian Biker is published ten times a year from Victoria, British Columbia.

Canadian Biker delivers experiential-style accounts of life on two wheels in our ten provinces, three territories and by Canadians traveling the world.