Thinking of a 2011 /12 Motorcycle?
It is never to early to plan for your next 2-wheeled weapon.

The Cycle World International Motorcycle Shows provides the opportunity to see the complete model line-up from all the top motorcycle manufacturers in one place.

SteveB (Stephen Berner) Is On The Air

SteveB is on the Get It Done in 2010 Seminar. He is a MarketingMan with a bent towards motorcycles. He has been there and done that or knows who did it.

Listen to Bob Kay & SteveB on the Biker Pros Podcast.

Each month Biker Pros hosts a teleconference with executives that are in and out of the Powersports marketplace.

About Steve B
SteveB, IronWorks Magazine, Editor in Chief…

In a past life I worked for American Iron Magazine and also wrote for Hot Bike as a freelancer. I am a leather crafter and photographer and publish two of my own blogs – in addition to my 20-hr a day dream job with IronWorks : Steveb’s Daily Blather and 45dgree.
-SteveB

A surge in social-media use by small businesses reflects a shift in how they operate and their comfort with increasingly easy-to-use technology.

In growing numbers, small-business owners are adopting social-networking services, location-based services, Twitter and online video to promote products and services, according to a new study by MerchantCircle, a social network for small businesses. It polled a fraction of its more than 1.3 million members.

END_OF_DOCUMENT_TOKEN_TO_BE_REPLACED

Q: Hi Steve! I listened and watched a webinar you did today and have a question: Do I really need to use Web 2.0 tools on my site? It is a simple site that explains my business and not much more. I don’t see the need. — Todd

END_OF_DOCUMENT_TOKEN_TO_BE_REPLACED

While some publishers eye the Apple iPad hopefully as way of migrating the print experience into a rich, multimedia domain as never before, others are already leaping over paper entirely to reach new readers with original digital publications.

In one of the latest direct-to-iPad initiatives, Richard Branson’s Virgin empire announced plans to launch its first consumer magazine on the Apple tablet without a companion print edition. Virgin claims Maverick magazine will be consistent with Virgin’s overall brand, says AdAge, but will include actual articles rather than promotions other Virgin properties.

END_OF_DOCUMENT_TOKEN_TO_BE_REPLACED

This is an interesting piece of technology that allows you to promote your business by 1. picking up the phone and 2. telling a story. After you hang up the audio is written to your website and you have a new piece of content.

After working with Bikernet Studio for a few years we are currently engaging in 2 upgrades.

1. Updating the interface along with the look and feel to be consistent with the main site, bikernet.com.
2. Moving the content so that it resides on the Cycle Source blog.

Now the exposure will be doubled and the demographics will be enhanced with a younger rider set.

Born in Kansas, Dennis Hopper was a consummate Angeleno: As an actor, he kept several backup careers going, including directing and a nearly 60-year stint as a visual artist. Stop into MOCA for the newly launched retrospective of paintings, photographs and large-scale installations, some of which date to the early 1960s. The exhibit features hundreds of pieces and was in the works before his death in late May, so if you missed his memorial service, don’t be ashamed to wander through MOCA wiping away tears.

“Dennis Hopper Double Standard” opened Sunday at the Geffen Contemporary, the Museum of Contemporary Art’s Little Tokyo warehouse. A sense of melancholy hangs over the late Hollywood maverick’s photographs, paintings, sculptures and mixed-media works. Hopper, 74, died in May from complications of prostate cancer. 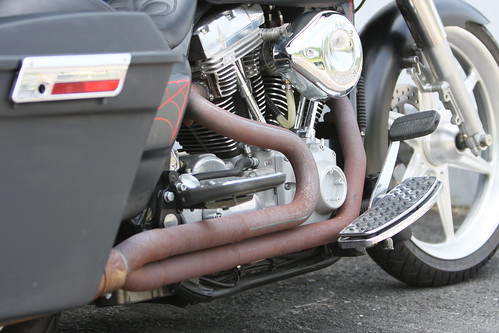 One thing everyone knows about Kendall Johnson is that he likes horsepower. His bikes really scoot. When D&D was making a swing through North Carolina for Smoke Out East, we stopped in at Kendall Johnson Customs to see Kendall’s ride.

With his personal bike he only cares for power. His 2002 Bagger sports and 131” motor with S&S bottom end and crank, S&S B2 race heads,S&S Super G Carb, Revolution Performance Cylinders and D&D’s Boarzilla pipe. END_OF_DOCUMENT_TOKEN_TO_BE_REPLACED 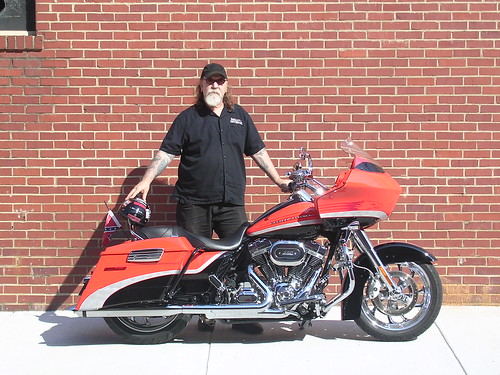 The Harley-Davidson Road Glide® Custom motorcycle is a classic touring bike with a slammed design and custom hot rod style. In order for the bike to handle well, it needs good shocks.

Rick Doss of Rick Doss, Inc. utilizes Suspension Technologies shocks on these bikes because they work so well. They keep you in the saddle longer, allows you to get through the turns faster… and maybe the most important aspect of the shock, it keeps your honey smiling.

Get more details at www.suspensiontechnologies.com