The 2013-14 Ultimate Builder Custom Bike Show series kicked off at the San Mateo County EventCenter with an eclectic and diverse group of custom sleds. Choppers, bobbers, sport bikes, pro street and restorations were all shined and polished for the tens of thousands of enthusiasts that streamed into the show.

At each show you never know who will show up. Denis Manning, Hall of Famer and owner of BUB Enterprises, was in-the-house checking out the latest products from the OEMS and the custom builders. Denis also has owned the world’s fastest motorcycle multiple times. He is shooting for the stratosphere of 400mph and looking to take the record back in 2015.

Dalton Walker of Split Image Kustoms finished his build at 1AM the day of the show and then rode hell for leather to San Mateo to enter into the Ultimate Builder.

The bike was built for his painter, Kal Koncepts, and features a custom springer and tank built into the frame. The engine is a 1984 Harley-Davidson, 84ci EVO polished with a SIK Mag. The bike is so new that it has not yet been named.

Jim Carducci Is a Harley guy and a dual sport guy… the results is a dual sport 2003 Harley Sportster. It features a NRHS 1250 Kit, Andrews and N4 Cams. It includes a hand-formed Aluminum gas tank, Ohlins suspension, custom triple clamps and custom swingarm.

Bones Legacy is the result of the meeting of two “old school” choppers lovers. But not just any choppers, the “period correct ones”, the ones from the past or the ones built as they would have been built at that time.

Paul Ponkov revealed his latest NORCAL Digger called Black Rainbow and he took the win. It features paint by Sonny Boy and engine mods include MAP Belt Drive, Kibbelwhite valves, Morris Mageto and SRM oil system. The frame is a stretched hand-made gooseneck which has been molded and smoothed throughout. Handmade tail light, pipes, oil tank, bars and pegs.

TPJ Customs is a complete fabrication shop located in Northern California. They build show bikes that are tough enough to stand up to everyday abuse but are unique and custom so they also look great on show bikes.

Bryan Schmike rolled his TPJ Mabel onto show floor and the first thing you notice is the minimal nature of the bike. Just about every piece of the big twin is hand made by the shop.

Ric Escobedo rolled his 2007 Honda Repsol CBR 1000RR into the convention center and it made an immediate impact.

It features a custom subframe, custom rear tail and the engine has had a EDR Super Sport Build up.

The Ultimate Builder Custom Bike Show is located on the silver carpet inside the International Motorcycle Show In NORCAL. 28 bikes entered the show and split $7,000 in cash awards and $500 in leather from Rocking K Customs and Garage Leathers. Get your bike into the game at www.custombikeshows.com.

Mariyln Stemp, Editor of IronWorks Magazine, contacted Biker Pros to write a review on the Metzeler ME 880 motorcycle tires. Listed below is the published article.

Metzeler ME 880 Donuts & the Case of the Head Shaking Nightster 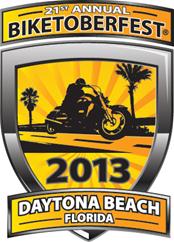 Reports are coming in from Daytona Biketoberfest that the attendance numbers from the event are still depressed. Traffic has been down since 2004.

The Daytona area that is receiving the majority of the rolling traffic are the traditional biker areas on Main Street, Beach Street, Daytona 500 racetrack, Mid-Town in Daytona Beach and Bruce Rossmeyer’s Destination Daytona in Ormond Beach.

At Biker Pros we use Instagram to promote the Ultimate Busiler Custom Bike Show as well as our customer accounts.

Garage Leathers On the Move – The solo bag manufacturer for Harley-Davidson Softails, Dynas, Sportsters, custom motorcycles and choppers, reports today that they have relocated to the Historic Marathon Village area of Nashville, Tennessee, from Midland Park, New Jersey.

The firm’s strategic plan is to consolidate the operations of Garage Leathers with their sister company Garage Coffee to enhance sales and improve operational efficiencies. Garage Coffee, a wholesale and retail firm, plans to entrench itself in Nashville and roll out moto-centric coffee shops that serve as showcases of the Garage Leathers’ product line. END_OF_DOCUMENT_TOKEN_TO_BE_REPLACED