The results of the latest AMD/Baird quarterly Harley-Davidson authorized dealer survey shows a continuing issue for Harley in terms of domestic sales.

Their 2014 annual results released in January showed that by the final quarter of the year their domestic US sales of new models had gone into reverse, and that trend is showing up in the responses to the February AMD/Baird survey. 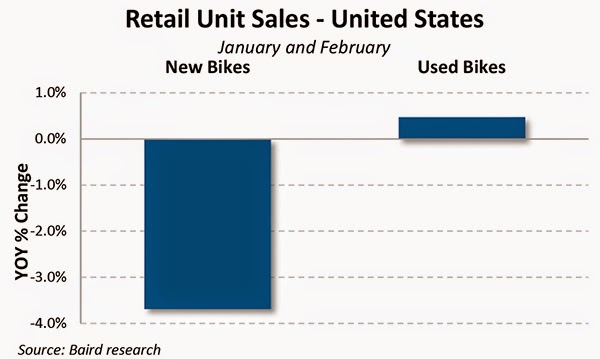 Indeed, the keyword there is “trend” – the dealers surveyed were reporting retail new unit sales down by between three and four percent for the first two months of the year.

Because of the strength of March, generally delivering at least 50 percent of first quarter sales, Robert W. Baird and Co. have maintained their full quarter US retail estimate of +2 percent (some 36,400 bikes), but it will have to have been a very good March in order for that to have happened.

Dealers reported slight declines in PG&A and service income, as well as new bike retail, but positive used bike retail trends should “help dealers work through used bike inventory – and help protect used bike values”, according to Baird.
While dealers are managing to sell all the Tourers, CVOs and Trikes they can get hold of, Sportsters, Dynas, Softails, V-Rods and Street models are trending negative. 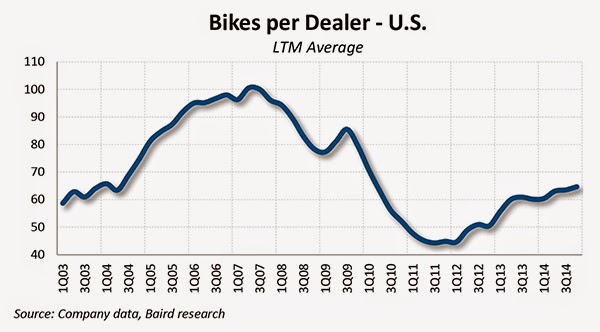 A lot of dealers referenced weather issues as being a factor in the first two months of the year, but the survey revealed considerable anecdotal evidence that Harley-Davidson could be facing product mix issues.

Baird asked dealers to rate the impact of key factors on retail demand in the period, and while new products were rated positively all other demand factors contributed negatively to the retail environment.

Notably, dealers cited a “sequential deterioration in weather and indicated that this was by far the largest demand headwind quarter-to-date” with trade-in values, government action/inaction and local economy issues” also cited as negatives. 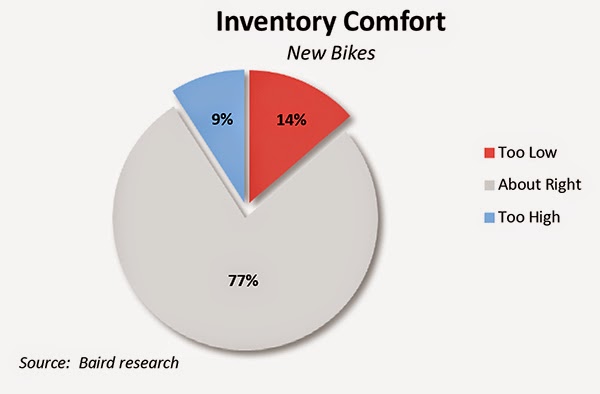 The dealer inventory position appears appropriate for the time of year, but commentary suggests that some dealerships’ levels of non-current models remain an issue.

Speaking to inventory levels and Harley-Davidson’s promotional activity, one dealer said that “the 70% [Road Glide] order plan hurts our ability to remain nimble with respect to market trends. Forecasting such a large percentage of our buying 90 days out doesn’t provide any strategic advantage to my dealership.” Another dealer said that “they are promoting the wrong things at the wrong time. I feel marketing is way off this year and I really do not appreciate a promo on an oil change that does not even cover my cost of goods. Too much on the LiveWire, not enough push on the Street when we finally got units. Core products in the catalogs that are on back order and cannot be [obtained] until the season is not acceptable – especially after these items were budgeted into our buying.”

Another said their “used bike market was flat last year, so we have a few more pre-owned than we desire, mostly due to the Rushmore bikes”; another dealer reported that they “still have several MY2014 units on the showroom floor. In past years, we usually haven’t had more than a couple carry-over units.”

Another dealer said that the “Motor Company is all-in on the Street and Outreach customers” but that the “bread is still buttered by Touring bikes.”

“Inventory is high because sales are slow” said one dealer, with another reporting that “the .99 finance rate on 2014 helps” and another that “sales seemed to have dropped a bit earlier last season and we found ourselves sitting on a little too much used bike inventory, which forced us to floor-plan them, which hurts,” but another commented that “Harley holding off on 2014 shipping of units helped move 2014 inventory.”

One of the areas in which any softening of demand will turn up as a trend is in new bike pricing relative to MSRP.  The bad news for Harley-Davidson is that 60 percent of dealers surveyed said that they are selling bikes below MSRP. Baird say that “while discounting has moderated from the elevated levels we saw during Q3 (when Harley used promotions to clear out non-current inventory), commentary suggests that dealers are still relying heavily on promotions to clear out non-current inventory.”

Baird has established a Harley-Davidson Dealer Sentiment Index, capturing both current and longer-term (3-5 year) dealer sentiment. Additionally, they ask dealers to evaluate Harley based on the company’s level of innovation and return on investment.

Both current dealer sentiment (62 vs. 78) and 3-5 year sentiment (71 vs. 80) declined on a year-over-year basis – likely attributable, in part, to the strong Rushmore launch last year. Last quarter, they began asking Harley dealers to rate their satisfaction with innovation (70) and return on investment (54). Broadly, Harley dealers remain satisfied with both metrics.

For context, sentiment readings can range from 0-100, with 50 providing a “neutral” outlook.

Given its timing, this quarterly survey was able to garner reaction to the announcement that CEO Keith Wandell is retiring and being replaced by Matt Levatich. The overall sentiment among dealers appears to be universally positive in terms of the job that Keith Wandell, as Harley’s first outside CEO hire, has done in helping the company weather the economic downturn.

Equally, most approve the appointment of Matt Levatich, but are maybe divided on whether or not someone coming from a manufacturing rather than retail background is the right follow-up to Wandell’s “tough love.”

With Baird’s reported current dealer sentiment index trending down on current conditions but up on 3-5 year outlook, some of this quarter’s dealer feedback on the subject is instructive … 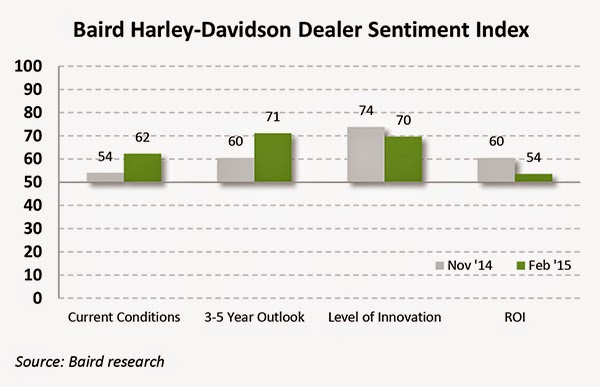